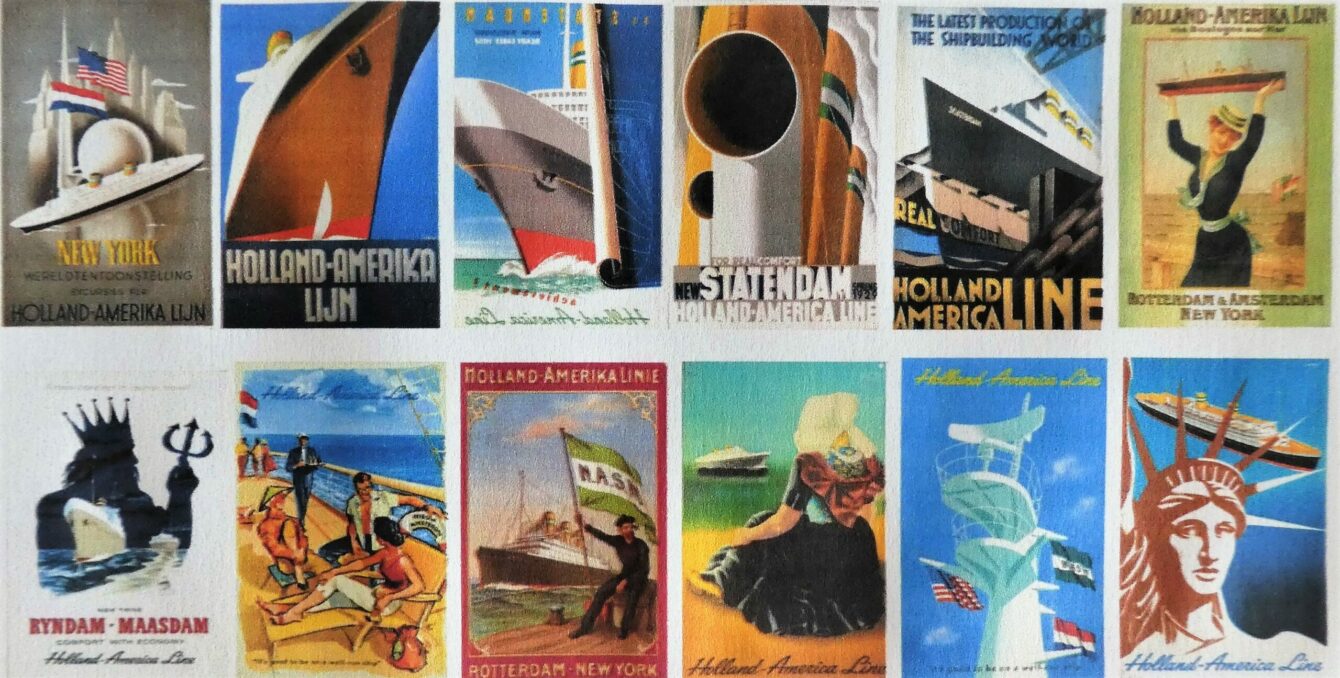 Since there is no accurate administration, it was not exactly known how many different tiles have been produced on behalf of Holland America Line. For the last 60 years the majority of the ceramic tiles have been manufactured by Royal Goedenwaagen-Gouda in Nieuw-Buinen, The Netherlands. On a global basis a search has been initiated by collectors to make an inventory of all tile editions from Royal Goedewaagen-Gouda. That inventory has been completed. The number of issued HAL official tile editions is set at 330 pieces. All tiles can be found on this website. Estimated 80 tiles are issued by associated organizations.

My collection consists of 406 tiles and 8 tile tableaus. The items in this collection have been acquired through website and exhibition purchases, through auctions and gifts.

This time instead of displaying a tile on the homepage, one finds Holland America Line advertisement posters from earlier years, which were used as the model for the Mariner Collection series 2007-2011. There is a specific reason for that.

The first two posters were designed by Wim ten Broek. The first one was on the occasion of the 1938 world exhibition in New York. The second one is the famous poster from 1936. Holland America Line has incorporated this image in its company logo since 1938 with a short interruption. The logo shows the Halve Maen against the background of the Nieuw Amsterdam. Since 2016 the Halve Maen has been eliminated (see menu Special Occasions).

Wim ten Broek was not only a talented artist, but he also played an important role in the resistance during WW II, for which little is known.

Dawn Skorczewski (research professor at the Brandeis University in Waltham, Massachusetts  and professor at the University of Amsterdam) and Esther Shaya (author of among others the touching Harry & Sieny, surviving in resistance and love) are writing a book about the neglected role that Wim ten Broek played in the resistance during WW II. Additionally, they want to bring attention to stories about the Nieuw Amsterdam II during wartime. Captain Albert Schoonderbeek, Holland America Line fleetmaster, whose knowledge of the HAL history is legendary, agreed to offer his contribution and suggestions.

The present question is: could you add anything about the role Wim ten Broek played in the resistance during WW II or do you have an exceptional story about the Nieuw Amsterdam II during wartime? Let me know via the answer form on the website or via tonrijppaert@gmail.com.

My most recent acquisition is the forth tile in the Mariner Collection series 2022. As a consequence of the renewed sailing of the Zaandam this series is now complete (see menu News). In the meantime, I have been able to add the inaugural tile of the Rotterdam VII to the collection, as well as the third tile of the series issued by the Portugese travel agent Marcus Harting when the ss Statendam visited Lisbon in 1972/1973 (see menu Earlier Tiles). These two tiles will be covered in a following update.